In recent years, with the rapid economic development and the continuous improvement of people’s living standards, the amount of organic waste has also increased rapidly. The characteristic of organic solid waste is the high content of organic matter, and most of them are easily used by microorganisms. In addition, organic solid waste often contains high levels of nitrogen and phosphorus. If the organic waste is not handled properly, it will lead to a series of environmental and social problems such as land occupation, polluted water and soil, air pollution, and disease transmission, which will affect the economic stability and healthy development to a certain extent.

In response to the national policy, the Anqiu biogas project was approved and started construction in 2018. The anaerobic part of this project applies German technology.

As we all know, biogas produced by anaerobic contains part of hydrogen sulfide, and hydrogen sulfide will cause corrosion of equipment pipelines, and is harmful to humans. Therefore, the desulfurization system is a necessary part of biogas plants. After fierce competition, the iron-based desulfurization system designed and produced by Mingshuo has been approved by the owner due to its following advantages.

Earlier this year, the project was installed and commissioned on site, and it is now in normal operation. 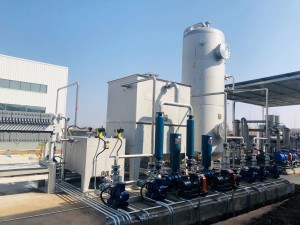